A legacy of preservation and sustainability.

What is the Greenprint?

The “Greenprint for the Future” was a plan to protect Pittsford’s farmland and ecological resources through the purchase of development rights by the Town. In 1996, more than 2,000 acres of open space were purchased, preserving two-thirds of the remaining farmland in the Town at that time.

In 2021 we commemorate the 25th anniversary of Pittsford’s “Greenprint for the Future.” Through this forward-looking program, unique for its time, the Town purchased development rights to significant expanses of open countryside, thereby preserving two-thirds of the then-remaining farmland in the Town – over 2,000 acres of open space in Pittsford, preserving all of this land from development.   We'll be adding information here throughout the year - be sure to check back often! 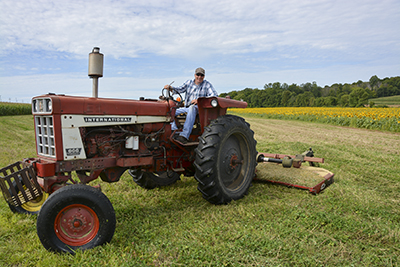 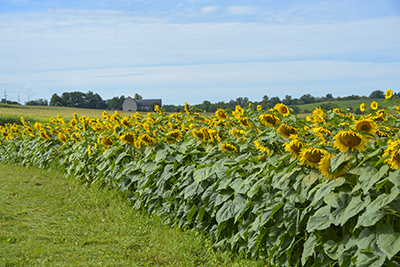 Among the farms the Greenprint preserved is the Hopkins Farm, comprised of approximately 350 acres along Clover Street between Calkins and Lehigh Station roads in the southwestern portion of the Town.  The farm’s main crops are corn, soybean, wheat and oats; the farm stand across from the homestead, in front of its historic barn on Clover Street, offers sweet corn, vegetables, pumpkins and squash.

Hopkins Farm also provides each year one of the most iconic images we associate with Pittsford, the lovely fields of sunflowers on Clover Street.

Established by Col. Caleb Hopkins, an early settler who gave Pittsford its name, Hopkins Farm is operated today by Mark Greene, the son of Mary Hopkins Greene.  Mark is the 6th generation of the family to work the farm.  For many years he assisted his uncle John Hopkins in managing the farm, before assuming farm operations himself. His children Ethan and Kimberly help work the farm with him today.  The federal style homestead and farm on Clover Street dates from 1815.

“Being part of the Greenprint means knowing that the land is going to be here in perpetuity” Mark said. “It takes away the uncertainty, so we can concentrate on what we need to do.  Food supply all starts right here on the farm.  You have to have land to do it.” Mark notes that our region has some of the most productive land in the country. “Pittsford’s top-rated soil types and climate are conducive to growing a diversity of crops produced for our food supply,” he said.  “It’s important to appreciate the region we live in and how important it is to preserve it.  Farms are a community asset,” said Mark.

The Hopkins Farm has been a treasure in Pittsford for more than 200 years.  The Greenprint preserves it as open farmland for countless generations to come. 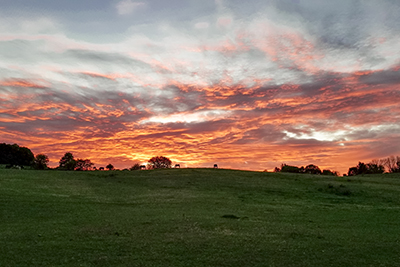 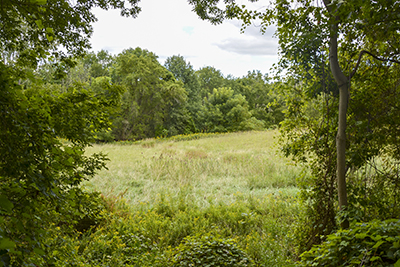 The 80-acre Lehman Farm on Mill Road was known in earlier times as the Snyder Farm and was passed to the Lehman side of the family. The Snyder/Lehman family began farming the land in the mid-1800s. The farm was a dairy in the 1960s and later produced kidney beans, soy beans and corn, and had a farm market on East Street. Today, the farm’s primary crop is hay. The farm is owned and farmed by Jim Lehman. It’s still home to several horses and has an iconic sunset view of the horse pasture hill.

Across Mill Road is the Snyder/Lehman Farm – a 24 acre parcel that was part of the original Snyder (later Lehman) Farm. Jim Lehman was able to purchase the farm because it was part of the Greenprint, which required that the land remain farmland – thereby keeping the purchase price attainable for farmers. “Nobody could pay as a high a price as a developer,” Jim says. That was an important advantage for farming in Pittsford because, as Jim puts it, “Once the land is developed, it’s gone.” 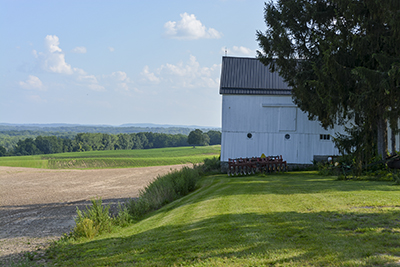 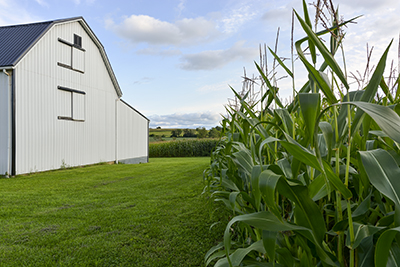 The Greenprint preserved three farms in the Knickerbocker family and a fourth that was later purchased by a family member. The J. Monroe Knickerbocker Farm has been farmed by the family since the mid-1800s and is currently owned by J. Monroe’s son, Larry Knickerbocker. Larry farms with his son Whitney. Larry’s young grandsons are the 8th generation on the farm and are already eagerly helping out with farm chores.

Overlooking the Irondequoit Valley, the 113-acre farm straddles both sides of Knickerbocker Road. Larry works the main farm, his personal farmland on Mendon Center Road, some leased acreage, and the Manno Farm on Willard/Mendon Center Roads (formerly the Irving Hopkins Farm), which he was able to purchase by participating in the Greenprint. The 226-acre Mano Farm had been preserved through the Greenprint as well. All together he farms about 500 acres in the Town.

“I bought the Manno Farm with the proceeds from selling the development rights to my farm.” says Larry. “And I would never have been able to match the price developers were willing to pay for that farmland without the Greenprint.” At the time, land was becoming more and more scarce. “There wasn’t enough land to work. Some farmers were forced out,” Larry says. He’s thankful the Town Greenprint saved so much land from development. “Now there’s enough land to keep farming here.”

Knickerbocker Farm’s main crops are corn, wheat, kidney beans, hay and straw. Their farm stand at 164 Knickerbocker Road offers a bit of everything, all home-grown: sweet corn, tomatoes, squash, peaches, eggs and more, plus pumpkins and cornstalks in the fall.

The H. Harlan Knickerbocker Farm has been owned by members of the Knickerbocker family since the Civil War era. It comprises more than 100 acres of highly-productive land. H. Harlan’s grandsons Rob and Alex Menzie currently own the farm, in addition to their farm in Lima, NY. The Menzies lease the farm to Bill Willard of Willard Farms for farming. 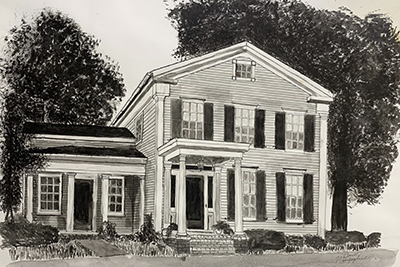 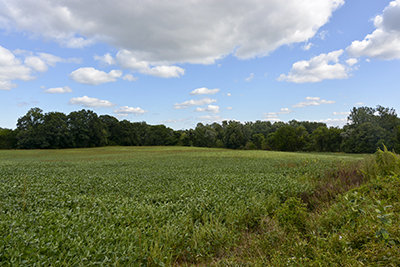 Initially part of the larger Zornow family farm, the lands on the Powers Farms have been cultivated since the late 1700s. Betsy Zornow Powers’ family purchased the farm in 1946 and established it as a very successful dairy farm. Her husband Roger Powers began managing the farm in the mid-1960s. In the late 1980s part of the farm passed to Betsy and Roger. Today, their children, children’s spouses, and their grandchildren help work the 175-acre Powers Farms, raising vegetables, small fruits, and ornamentals for their very popular Powers Farm Market at 161 Marsh Road, and they all help with a variety of annual seasonal events held at the farm and market.

Over several years, the Powers family restored the c.1840 Albert White Farm homestead on the property and made it their family home. The Albert White Farm was one of four original farms that make up Powers Farms.

The Powers also own and farm the 75 acre former Sweeney Farm on East Street – also preserved by the Greenprint. The Sweeney Farm was nearly turned into a housing development, but the Greenprint plan allowed the Town to purchase the development rights and enabled Roger Powers to buy the farm, preserving it for agricultural use. Roger Powers believes farms are an important asset to our community. He strives to highlight their value by educating and inspiring his customers through various events and activities at his farm and market. He’s grateful the Greenprint helped keep farming in Pittsford – and helped preserve the beauty of our open spaces.

“The Greenprint made farming possible,” Roger says. “Without it, farming was on its way to extinction in Pittsford. There would be wall-to-wall development.” 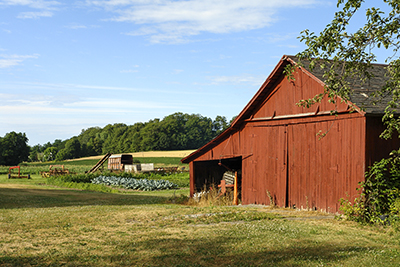 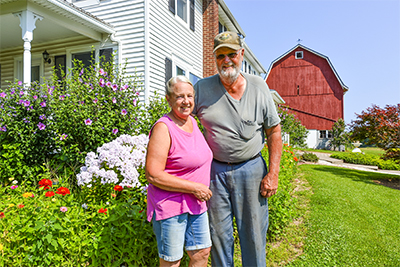 Willard Farms spans both sides of Willard Road. Founded by Oliver Perry Willard and Mary Evelyn Burlingame in the 1880s, it’s been run by the family for generations. Today Bill Willard (4th generation) and Marc Krieger (5th generation) own and farm the land. Bill’s wife Paula runs the farmstand. The homestead and farmstand are located at 116 Willard Road, surrounded by over 80 acres of farmland. Bill and Marc farm an additional 100 acres on the nearby Menzie/H. Harlan Knickerbocker Farm. Bill’s been farming the land all his life, and his grandchildren – the 6th generation on the farm – are already helping out picking beans.

The wheat, corn and soybeans the Willards grow is sold wholesale. Their farmstand features sweet corn, tomatoes, and a variety of squash and other vegetables, including green and yellow beans, broccoli, cauliflower and cabbage, plus pumpkins in the fall – all home grown.

Bill says the farm was frequently targeted by developers before the Greenprint. “My father (Walter Willard) told me he used to get four to five builders stopping by a week offering to buy the land,” he says. Walter Willard refused the offers but was concerned that someday he would have to sell. Once the Greenprint went through in 1996 and the Town purchased their development rights, the Willards no longer had to worry about selling. “I’m very thankful for the Greenprint,” says Bill Willard, “It took a lot of pressure off of us.”