Save the Trees on our Canal

In 2017 the New York Power Authority (NYPA), which owns the State Canal Corporation that oversees the Erie Canal, presented plans to clearcut trees along the Canal.

In 2018 Pittsford went to court, joined by Brighton and Perinton, to stop this from happening.  Town Attorney Robert Koegel, an experienced environmental law and municipal law litigator, prepared and argued the case for the three towns, thereby sparing Pittsford the expense of legal fees.

We won.  We obtained an injunction to stop the cutting and requiring the Power Authority to conduct the environmental review under State law.

The Power Authority completed the review and has now filed its Draft Generic Environmental Impact Statement and a proposed Guide Book.  It has solicited written comments, and held a public hearing in July.  At that hearing Town Supervisor Bill Smith spoke on behalf of Pittsford, emphasizing that the Power Authority has not established a need for clearcutting and that in any event its actions are subject to approval by our Planning Board, pursuant to the Town’s Local Waterfront Redevelopment Plan, that the Authority is bound by law to observe.

You can read here the Supervisor’s statement at the public hearing.

The Town Attorney has included these and other points among the extensive and detailed written comments the Town submitted on August 26, 2021.

You can read here the Town of Pittsford’s comments on the Power Authority’s Draft Environmental Impact Statement and Draft Embankment Maintenance Guidebook, which summarizes the Town’s position.

Supervisor Smith has stated clearly that the Town of Pittsford will assert its rights in this matter as vigorously as it has in the past.

Please make your voice heard as well.  You can submit your comments in response to the Power Authority’s Draft Environmental Impact Statement and proposed Embankment Maintenance Guidebook, which outlines its rationale for clearcutting trees along the canal, to NYSCC-Embankments@bergmannpc.com.

Supervisor Smith offered comments on behalf of Pittsford at the State Power Authority’s Information Session regarding their plan to clearcut trees along the Erie Canal’s embankments, including the embankment in Pittsford.  You can watch the video by clicking here: https://fb.watch/8crUgJpoof/

He reminded them that as a Town with a Local Waterfront Revitalization Plan, our consent to any cutting plan is necessary before they can proceed with any such work within our borders. He once again reminded the Power Authority that the Town of Pittsford will assert its rights in this matter as vigorously as we have in the past.

Supervisor Smith ask to please make your voice heard as well! You can submit your comments in response to the plans for clearcutting trees along the canal, to NYSCC-Embankments@bergmannpc.com

7/14/21 Supervisor Smith speaks on behalf of Pittsford residents at the New York Power Authority’s virtual public hearing regarding its plan to clearcut trees along the Erie Canal.  You can read his statement here.

3/8/19 On the one year anniversary of winning our lawsuit, the Town Attorney and Town Supervisor met with Elizabeth Agte and Ginny Maier of Stop the Canal Clear Cut to plan the Town’s next steps as the Canal Corporation and Power Authority began the environmental review that our court order compels them to undertake. Specifically, to bring the State to the table to work out a tree management program acceptable to our residents.

6/23/21 The Power Authority completed the review and filed its Draft Generic Environmental Impact Statement and a proposed Guide Book. It solicited oral comments for a July 14 virtual hearing, and written comments by August 5. This was an unusually short period for comments on a document of this length and complexity. On June 30 Town Attorney Robert Koegel wrote to the Power Authority asking for an extension of the comment period. Other local advocates supporting our position did so as well. The Power Authority initially agreed to extend the period for written comments by a month, to September 5 and later agreed to extend the comment period to October 15.

Acting State Supreme Court Justice Daniel Barrett ruled in favor of the towns of Pittsford, Perinton and Brighton in the suit they brought against the Power Authority of the State of New York and the New York State Canal Corporation.

The Towns claimed that the Power Authority and Canal Corporation improperly classified their project to clearcut trees on the Canal, thereby avoiding the full environmental review required by law. The Judge agreed. His decision found that the project is indeed a Type I project under the State Environmental Quality Review Act (“SEQRA”), requiring the environmental review mandated by law for such a project.

The injunction against cutting trees on the Canal in Pittsford, Perinton and Brighton continues, pending the Power Authority and Canal Corporation complying with SEQRA.

2/26/18 The Towns of Pittsford, Brighton, and Perinton filed reply papers in the canal litigation. This was in response to answering papers filed by the NYS Canal Corporation and Power Authority in which they attempted to reclassify the scope of the project by referring to it as a maintenance project and declaring emergencies along certain areas of the canal embankment. Review all of the documents by clicking the links below:

2/9/18 Acting Supreme Court Justice Daniel Barrett granted the Temporary Restraining Order that the Towns of Pittsford, Brighton and Perinton requested. This enjoined and restrained the Power Authority and the Canal Corporation from taking any steps or actions to remove vegetation from the Canal embankments, pending the hearing and determination of the case.

2/6/18 The Towns of Pittsford, Brighton and Perinton filed a joint action against the Power Authority of the State of New York and the New York State Canal Corporation, to require the state agencies to comply with applicable environmental laws before continuing to clearcut trees along the Canal embankment. The three towns also petitioned for a temporary restraining order to enjoin any further tree cutting pending the resolution of this suit. Use these links to read the Petition and the accompanying Memorandum of Law.

1/10/18 The Pittsford Town Board authorized the Town of Pittsford to proceed in discussion with legal counsel to consider pursuing legal action with regard to the New York Power Authority and New York State Canal Corporation’s plan to clearcut trees along the Erie Canal in Pittsford.

12/18/17 Pittsford and Perinton hold a public meeting about the canal tree clearcutting issue in the Fisher Meeting Room of the Pittsford Community Library. The purpose of the meeting was so residents could make their views known and to discuss where the Town stood procedurally. In preparation for the meeting, Pittsford’s Town Attorney Robert Koegel, an experienced environmental law and municipal law litigator, began to evaluate whether the Power Authority had complied with the State Environmental Quality Review Act in assessing the impact of its proposed cutting on the natural environment of the Canal.

11/20/17 Town Supervisor Bill Smith attended the Power Authority’s presentation on its plans to clearcut trees along the canal and discussed with its representatives the specifics of the project. This discussion disclosed that the Power Authority’s proposed to clearcut sections of the canal in Pittsford in the eastern portion of the Town.  This would affect the view along one of the Town’s major corridors, a portion of Jefferson Road on the south side of the Canal opposite an area slated to be cleared. This would have an immediate aesthetic affect and could adversely affect property values along Marsh Road and adjoining neighborhoods. Currently the homes view the woods. After the proposed cutting the view would be that of the massive earthen embankment. 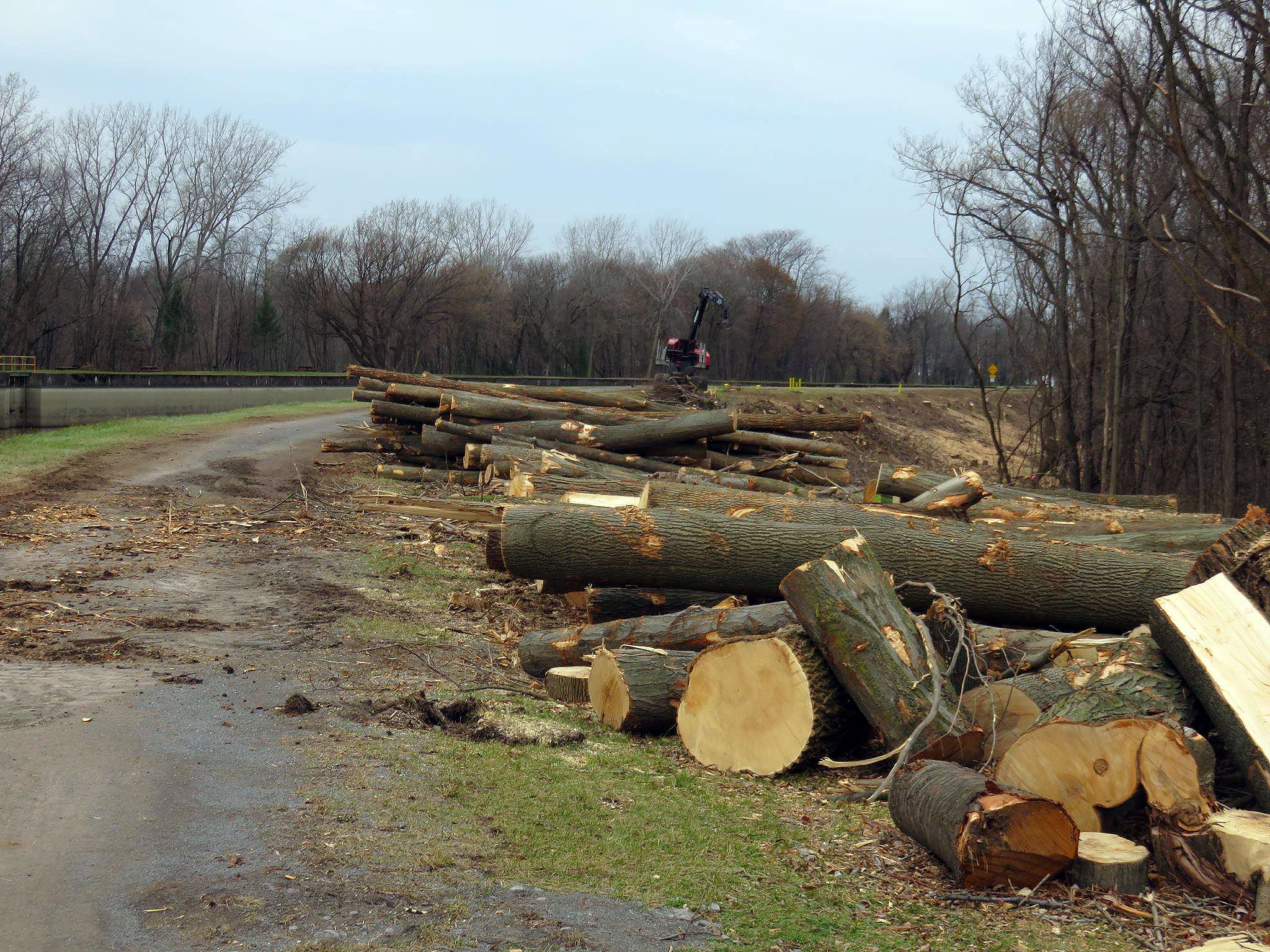