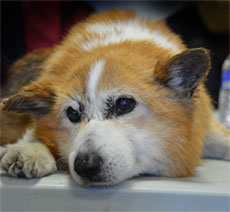 Rabies is a preventable viral disease of mammals (including humans) most often transmitted through the bite of a rabid animal. The rabies virus infects the central nervous system. Early symptoms, which may last for several days, include irritability, headache, fever, malaise, and sometimes discomfort or tingling at the site of the bite or exposure. Within days the patient may develop slight or partial paralysis, hallucinations, agitation, hyper salivation, difficulty swallowing, hydrophobia, anxiety, confusion, excitation, convulsions, and delirium. Rabies is almost always fatal once symptoms appear.

There are three common ways that humans may become exposed to rabies. The first way is if a person is bitten by a skunk, fox, coyote, raccoon or bat that has tested positive for rabies or the animal is not available for rabies testing. The second way would be if a person was bitten by a dog, cat or ferret that is unavailable for testing or a 10-day observation period. Finally if the person has had contact with a bat, or a bat is found in an enclosed setting with a person that may not be fully aware of its presence. (ex., an infant, a person that is sleeping or intoxicated). If you feel that you have been exposed to rabies, immediately wash the exposure area with soap and water. You should then contact your local physician or the local health department (753-5864) to determine the next course of action.

However, in the United States, rabies rarely infects humans because of companion animal vaccination programs and the availability of human rabies vaccine. There have been no human cases of rabies in New York City for more than 50 years. New York State has reported 14 human cases since 1925. The vast majority of rabies cases in the United States each year occur in wild animals. Animals such as raccoons, skunks, bats, and foxes are considered vector species. Vector species are animals that are highly susceptible to contracting the rabies virus. Rabbits and small rodents (such as chipmunks, gerbils, guinea pigs, hamsters, mice, rats, and squirrels) are rarely found to be infected with rabies and have not been known to transmit rabies to people.

How can you tell if an animal has rabies? Some signs to look for are unusual aggressiveness or tameness, excessive drooling, and dragging of hind legs or mobility problems. Seeing a nocturnal animal during the day is not a good indication of whether or not an animal is rabid. Pet food, bird seed, and garbage can attract these animals. Weather changes also play a role in nocturnal animals being seen during the day. If you do see some of these signs in a wild animal, the best thing to do is stay away and let your neighbors know about the animals presence. The next course of action would be to call the Animal Control Officer to come evaluate the animal. Residents should not try to put down the animal themselves due to possible exposure. All Animal Control Officers are required to have preventative rabies vaccinations and are trained for these situations. If you think that you have a rabid animal, please contact the Animal Control office at 248-6240.